The circle of fire - Part 3: the other cargo

The European press makes no mention of the great anxiety triggered by the news of the fire on board La Touraine in the United States and in London. After the initial call for help there was just one brief transmission from the stricken ship followed by six hours of silence. This period was during the early hours of the morning in France, but mid evening in New York which is six hours behind French time, or Chicago, seven hours behind.

Unlike their European colleagues, the American press had no inhibitions about reporting as front page news exactly what cargo this civilian passenger liner was carrying. According to the Chicago Tribune of 7th March 1915, aboard La Touraine were
The New York Times went into even greater detail on the same day.


Although the French Line officials denied that there were explosives aboard, the manifest at the Customs House showed that in her 1,200 tons of cargo she held 4,494 cases of cartridges, 139 rapid-fire guns and 500 cases of ammunition for those guns. These weighed twenty-six tons and were valued at $21,000. There were also 550 cases of heavy ammunition for rapid-fire guns weighing 55,000 pounds and valued at $23,000, two heavy automatic guns, barrels of turpentine, five cases of automatic revolvers, 12,000 pounds of blankets, a large amount of foodstuffs including beef, sausages, lard and flour. There were no oils in the manifest. When Mr Cauchois's [*] attention was called to the articles covered in the manifest, he replied: "But cartridges are not explosives" [†].

Small wonder for the panic in the US press, and respect for those of the crew of La Touraine who had to fight the fire, all the while knowing that they were sitting on a bomb.

Nothing of this cargo was in the detritus seen spread out for inspection in the hangars of Le Havre. Machine guns may have been spirited away, but not waggon wheels or all that cloth. No, these war materials were in the main cargo hold, safely battened down before the passengers and their property joined the ship. They reached their destination unharmed. Had the fire reached the ammunition, there would have been a large Bastille day firework and then Goodnight Vienna. The ship would not have survived. 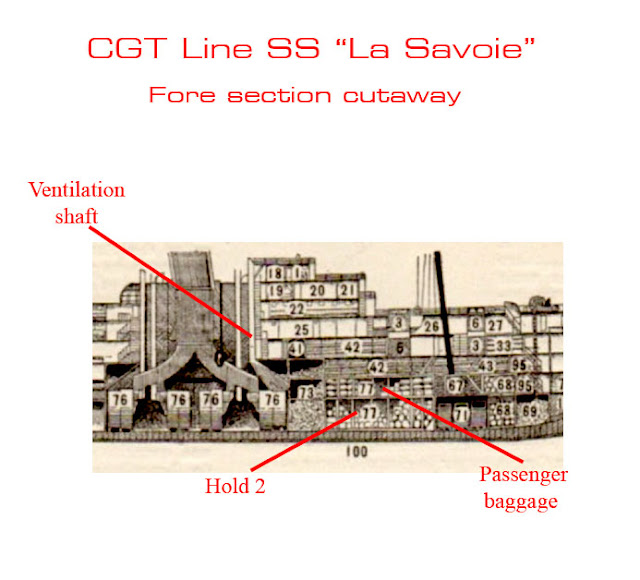 As far as the Germans were concerned, this military cargo was contraband, which would render la Touraine a fair target, for a U-boat (as in Falaba's case) or for... a saboteur.

British intelligence and the US Secret Service were clearly aware of the possibility of sabotage to ships travelling from ports in the USA, and from New York in particular, to Europe. Lusitania, a (British) Cunard liner, was searched minutely from end to end before her departure, for an attack was expected, as was noted in Le Journal of 7 March,

Where did the La Touraine fire come from?.

German embassy staff and military attachés were organising covert operations against American supply lines to Europe from the beginning of the War. But Britain was the filter of almost all communications between Germany and the (at that time neutral) USA because one of the first acts by the British at the declaration of war was to cut Germany's transatlantic cables, which led from Ireland, at that time still part of the UK. For that reason, Germany's "Secret War" in the United States was always more or less compromised. Millions of tons of supplies were moving across the Atlantic from the USA to Europe. It was vital for Germany to cut that supply line. A bomb big enough to cause sufficient damage to a large ship to sink it was just too big to go unnoticed, even if the ticking clockwork did not give it away.

British Intelligence knew something new was happening. Just what that was, will keep for the next post.
Posted by Pollygarter at 07:30