During her many years spent criss-crossing the Atlantic, Touraine, the liner mentioned in our shred of newspaper from 1915, became involved in one adventure after another. You can read about the original story, The historic liner and the German spy, here.  The best known of these is the loss of RMS Titanic. Touraine was en route from New York to Le Havre as Titanic was setting off from Ireland bound for New York. Touraine encountered pack ice and icebergs, and informed Titanic of their presence by wireless. To no avail.

Below is a prescient article written less than a week after the disaster, which appeared in the journal Le Gaulois on 20th April 1912, followed by my translation. 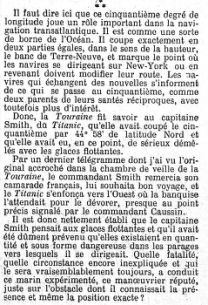 Alongside the majestic France, whose entry into service the Compagnie Générale Transatlantique greeted with lavish celebrations, is moored in the Transatlantic harbour the liner Touraine, of the same company, which arrived yesterday from New York.

Master Mariner Caussin, a fine young seafarer, with a direct gaze and decisive movements, is commander of the Touraine. He is keen to give me, on the subject of the voyage he has just completed, some information worthy, it seems to me, of being retained.

Touraine left New York for Le Havre on a scheduled voyage on Saturday 6th April. On Wednesday 10th April, at midnight, she was at the southern tip of the Newfoundland bank, when a few small ice floes appeared on the water; they in no way hindered her progress and her speed was maintained at 15 knots. But these ice floes soon became bigger and more numerous, so much so that an hour later the vessel found herself among pack ice banks, large enough to become dangerous if the hull struck them.

Commander Caussin therefore ordered reductions in speed which fell progressively to four knots. Then, seeking out clear water among the jumble of ice blocks, he succeeded in freeing the ship from the ice field by making a turn southwards.

During the day, another ice field was sighted to the north and was avoided. Two icebergs also appeared. Then, the region of ice having been crossed (which hardly extends, in this season, further than the Newfoundland Bank), the sea became clear and Touraine resumed her course and speed.

While heading for Europe, she communicated, in the constant manner provided so fortunately by the wireless telegraph, with the ships passing, in one direction or the other, within range of her electric beams.

It was thus that, on 12th April, at 7:45 in the evening, she entered into conversation with the Titanic, which was about 100 miles east, on the way to New York. The giant vessel asked Touraine kindly to let her know at which latitude she had crossed the 50th meridian (from Greenwich) and if she had found any ice or fog there.

It must be said that this Fiftieth meridian plays an important role in transatlantic navigation. It is like a sort of oceanic milestone. It cuts the Newfoundland Bank precisely in two, from north to south, and marks the point at which ships make a change of direction for New York, or on the return trip must modify their route. The ships that exchange news inform each other of what is happening at the Fiftieth, like two relatives of each other's health, always with great interest.

Therefore, Touraine made it known to Captain Smith, of Titanic, that he had crossed the 50th at 44° 58" of latitude north and that she had had, at this point, serious entanglements with floating ice.

By a last telegram, whose original I saw pinned up in the watch room of Touraine, Commander Smith thanked his French comrade, wished him bon voyage, and Titanic ploughed on westwards where the ice fields awaited to devour her, exactly at the spot indicated by Commander Caussin.

It is therefore clearly established that Captain Smith was thinking about floating ice and he had been duly warned that it was present in dangerous quantity and form, in the close vicinity of the route on which he was proceeding. What fatality, which circumstance as yet unexplained and which it seems must forever be so, led this experienced seafarer, this reputable navigator, straight to this obstacle that he knew stood in his way, and even its exact position?

Commander Charles-Fernand Caussin joined CGT as captain of Touraine in September 1911 after leaving the French naval service.  It is interesting that Caussin's reaction to the increasing presence of ice was to slow down till Touraine was creeping along at 4 knots. He had no warning of what lay ahead but his lookouts did their job to perfection.  His cautious approach, his experience, and a crew who worked together and knew each other well, enabled him to feel his way into clear water.


Captain Smith knew that ice was present but carried on at Titanic's full speed of 22 knots. That was the received wisdom at the time, as was revealed at the subsequent boards of enquiry (American and British) into the sinking of the Titanic. This damn-the-battleships approach was heavily criticised at the boards of enquiry and (in the American board anyway) Smith was held responsible, although any of Cunard's captains would have done the same.

Another factor causing Titanic's captain to disregard the ice warning was the Paris baseline from which longitude was given. Attempts to adopt a global definition of the zero meridian began in the early 19th century, and by 1912 many seafaring nations, including the Japanese, had adopted Greenwich as the standard. But then there was national pride to take into consideration. You can read a beautifully written history of the zero meridian at thegreenwichmeridian.org. Titanic's wireless operators were actually Marconi employees, rather than Cunard crewmen. They appear to have concluded that Touraine had taken a more northerly route which was shorter but at greater risk from ice so early in the year.


"At the subsequent enquiry, the potential for confusion became apparent for all to see, when it was revealed that the telegram sent from the French vessel La Touraine to the Titanic giving the locations of various ice fields and icebergs gave the times in terms of the Greenwich Meridian, but the longitudes in terms of the Paris one. Although there was no suggestion that this was why the Titanic had struck the iceberg, it undoubtedly struck a chord. The Portuguese adopted the Greenwich Meridian in 1913 and the French on all their nautical documents with effect from 1 January 1914. Finally the point had been reached where all the maritime nations of Europe were using the same meridian."

When CGT's new liner France set off on her maiden transatlantic voyage on 21st April 1912, she had an escort, as much to reassure her passengers as anything, a sort of lucky charm, although her slower pace would prevent the new liner claiming the Blue Riband for the fastest crossing - what vessel but Touraine.
Posted by Pollygarter at 07:30 1 comment: