A great patriot, or the man who divided his country?

The article that first alerted me to the date of our scrap of newsprint mentioned Greece, the Hellenes, the Dardanelles. A name - Venizelos. 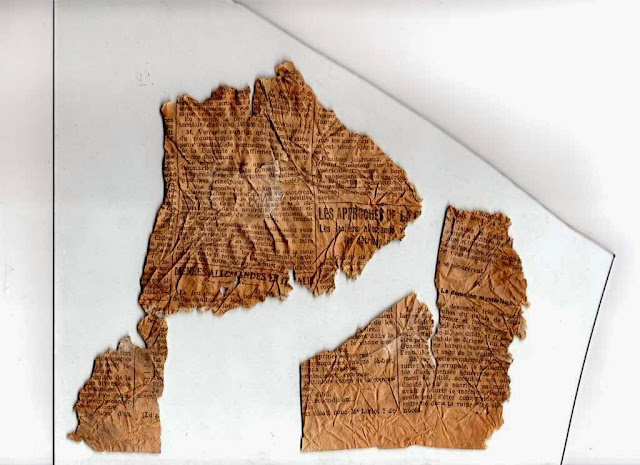 And an image came into my head. A picture of a grave on the Greek island of Crete, at Moni Profitis Elias, high on a hillside shaded by pines, overlooking the Akrotiri peninsula and the city of Chania. The view from the grave site is breathtaking and every visitor must have taken this photograph, myself included.

The article describes Elevtherios Venizelos as the former President of the royal council, but he was that more than once. The name of the current premier, Gounaris, clinched it. This fragment could only have been printed in late March or very early April 1915.

At the beginning of the first world war, the people of Greece were united behind their king, Constantine I, and his President of Council, Elevtherios Venizelos. They had just emerged war-weary but victorious from the Balkan Wars against Bulgaria. This victory had doubled the territory of a nation that did not exist as such eighty years earlier. Greece and Bulgaria both remained neutral at the outbreak of war, even though a murder in Serbia, which shared frontiers with both countries, was the trigger for the war. Serbia, like Greece and Russia, is an Orthodox country and the natural sympathies of most Greeks lay with the Serbs. Constantine, however, grandson of a Danish princeling and of Hapsburg blood, was Kaiser Willhelm's brother-in-law.

By the end of the war, Constantine had been forced to abdicate in favour of his son, Alexander, and a Greek army of 300,000 was fighting German and Austrian forces in Macedonia alongside troops from France, Russia and Britain. Venizelos was again President of the Royal council, but there were deep divisions in Greece between Royalists and Venizelists, those who wanted the status quo and those who favoured a Greater Greece.  Greeks had raised their hands against Greeks, blood had been shed, and there was more, much more, to come.

An outline of the extraordinary period in Greek history between 1914 and 1918 can be found here. All I can attempt to do here is concentrate on the few weeks during which our newspaper was published.

In March 1915 "the enterprise of the Dardanelles", as Venizelos called it, was at its height, if such it may be called, and the Greek government had dithered about providing any support whatsoever to either side, refusing the warships of the Great Powers coaling facilities.

Venizelos resigned as president of the council of King Constantine of Greece on 6th March 1915 over a proposal under the benign supervision of the Great Powers, and by Sir Edward Grey and the British government in particular, for Bulgaria and Greece to come out of neutrality simultaneously and attack the Ottoman forces. The inducement to be offered to Bulgaria was a port, Kavalla, on the Aegean Sea (see the map). The land, referred to in the article as "the cazas of Sarichabon, Cavalla and Drama" was part of Greece, recently acquired the hard way in the latest of a series of bruising wars with Bulgaria. "The Bulgarian threat" (le péril Bulgare) was still of great concern in Greece.

Greece, in return for her sacrifice, was to be granted a much larger area, on the mainland of Asia Minor, then part of the Ottoman Empire, longer ago part of the Byzantine empire, in the present day the western half of Turkey.  Many of the inhabitants of this area (what? Oh yes, them) were Greek-speaking, and the proposals revealed in an article in le Matin casually referred to managed mass relocation as though people could be taken out of their boxes and moved around and swapped like toy soldiers.

W. Holt-Wright, writing in the Daily Express of 29th March 1915, was one of few British journalists to take Venizelos seriously. He says:


M. Venizelos is the idol of Greece; he has steered his country to victory in two successive wars, and he, more than any man, has brought about a spirit of Greek revival, and has inspired his countrymen to espouse the great cause of the liberation of the 4,000,000 Greeks who still remain the pitiful vassals of the Turk....

M. Venizelos’ plan was clean-cut, comparatively simple, and extraordinarily bold. In effect, he said, the Great Powers are much too busy to interfere; let the Balkan States, therefore, forget their recent quarrels, revive the shattered League, which must now include Roumania, hurl the Turks from Asia Minor, and repatriate their various lost tribes. The Allies, he assured the Greeks, must inevitably win, and when the war was over, apart from the fact that possession was nine points of the law, they would be too sensible of the great help the Balkan States had afforded them to rob them of the fruits of victory.

Nothing, of course, except some possible difficulties in the case of Italy, could have been more welcome to the Allies, and the Greeks were buoyed up with hope and a real and splendid endeavour. Roumania might raise objections, but M. Venizelos was quite certain that an arrangement could be made with her. She also had people — under the heel of Hungary — to be freed.

So far. so good. It was on the question of the bargain with Bulgaria that M. Venizelos nominally fell. He proposed to set a sprat to catch a whale  — that is, he was prepared to cede Bulgaria a small portion of Grecian territory in return for a much larger tract of territory in Asia Minor when the resuscitated Balkan League should have wrested it from the Turk.

From the point of plain common sense it is hard to see where M. Venizelos erred in his calculations and designs. He proposed, reluctantly of course, to surrender the Kavalla district, which has an extent of 2,000 square kilometres and a population of 30,000, but in return Greece was to receive in Asia Minor territory amounting to 125,000 square kilometres, the inhabitants of which -- mostly Greeks — number nearly a million. Thus, in tho event of victory, M. Venizelos would have nearly doubled the present size of Greece, and would have added nearly 20 per cent to the present population.

It was a great dream and a bold scheme and there were unquestionably "conversations” with both Roumania and Bulgaria...

At the promptings of King Constantine, the military declared that the army had not yet recovered from the past two wars. M. Venizelos made answer that an expeditionary force of 50,000 men would be sufficient to secure his purpose and win the goodwill of the Allies.

He also proudly pointed to the fact that during the recent Balkan wars 40,000 Greeks, practically an army corps, had alone come over from the United States — where there are 500,000 of them — and had not merely paid all their expenses for the honour of fighting for Greece, but had actually brought all their savings to pay into the Greek Treasury to aid the success of the campaign.

Next, the Greek financiers were brought to bear on M. Venizelos’ venture. The monetary burden of the campaign, they said, would be more than Greece could support. To all intents and purposes M. Venizelos retorted, “ Nothing ventured, nothing gained.” [nothing changes much here, does it?]
The strictly private and confidential “conversations” with Roumania and Bulgaria went on, and, at the last, there is no doubt that M. Venizelos thought the way was clear for war. Then King Constantine hurled his neutral bombshell. He would never consent to cede an inch of Greek territory, ho said, no matter what was to be got in return; and he declared that he had never allowed M. Venizelos to suppose that he could conduct any negotiations upon such lines.

Deeply offended by the perceived insult,Venizelos resigned, vowing to give up politics forever, but not before publishing the whole thing in the Patris newspaper. The proposal (somewhat selectively) and a slagging by the ultra-conservative toady Gounaris, are the subject of this article.

For once, I have actually located the entire article in the pages of Le Petit Journal at la Bibliothèque Nationale de France. In the library copy, which is a Paris edition, rather than our provincial one, it was published on 3rd April rather than 4th.

Other Greek-speaking enclaves around the Mediterranean, such as Corfu, Symi and the Dodecanese, along with Trieste and Trentino, were at this time being bundled up, successfully in this case, as an inducement to Italy to join the war on the Great Powers' side. The story next to the Venizelos article, represented on our fragment only by a list of words, proved to have the title "L'accord de l'Italie avec la Serbie et la Russie". 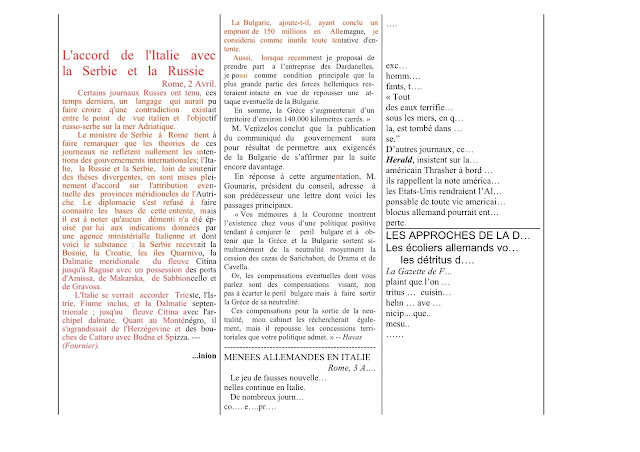 And here is the whole article, with an English translation. 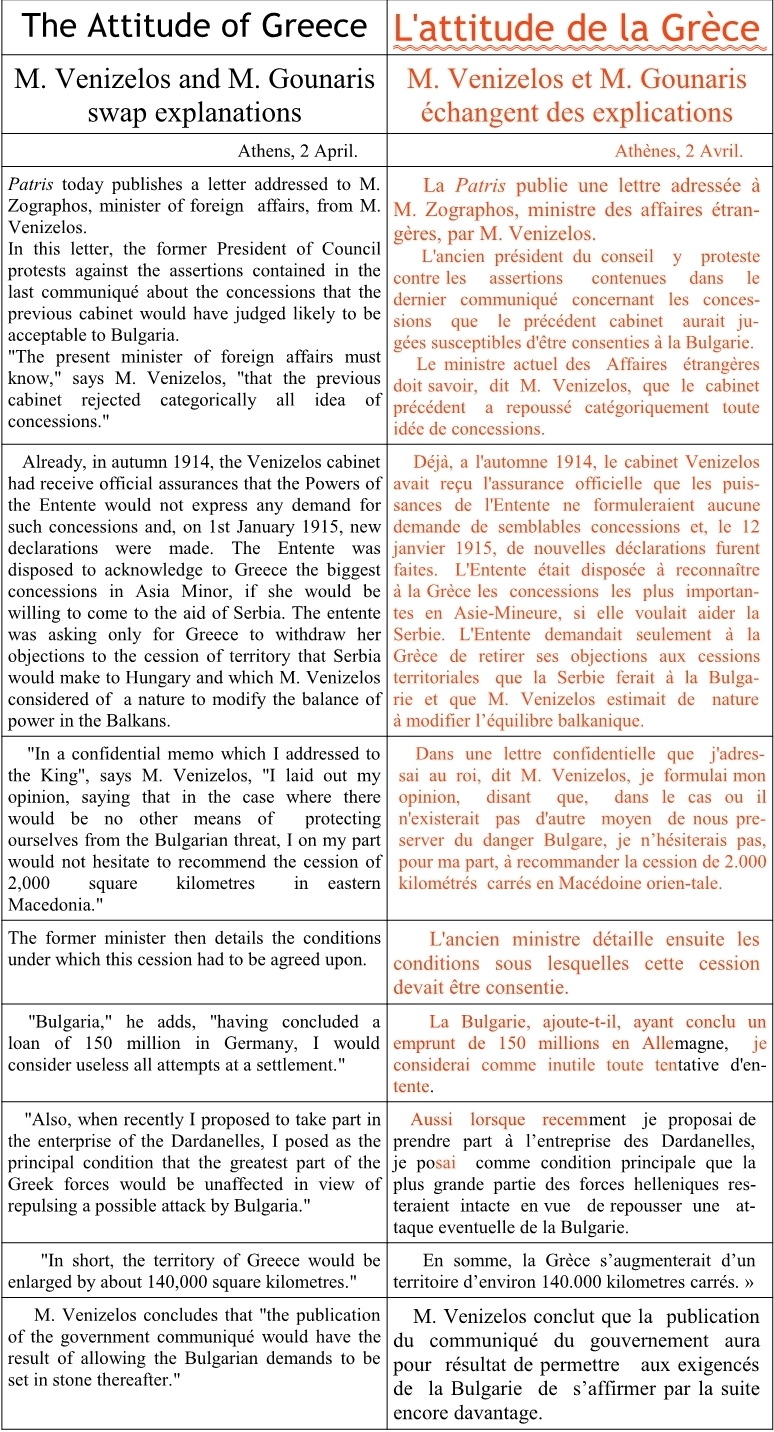 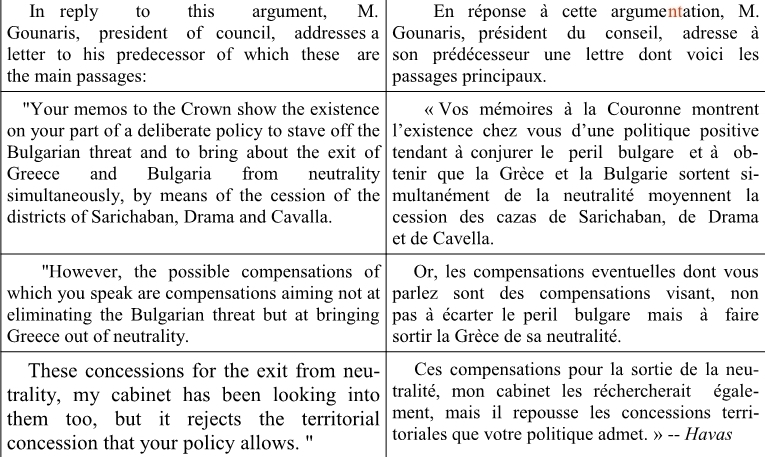 And Venizelos? He admired the British and their Parliamentary system. Who was he? A natural politician, born into a relatively humble (i.e. middle class) family in Crete. He is another man who could be called a bundle of energy, a man of massive highs and lows. He rose to the top in the Greek parliament simply by being better than anyone else.

Elevtherios Venezelos is still beloved in his native island. There are daily coach outings to his birthplace in Mournies and to his grave.

Any suggestion of that he might have lived with a bipolar condition may be considered alongside the fact that he was a Cretan. I can only refer you to the works of his near contemporary and great admirer, Nikos Kazantzakis, and particularly Zorba the Greek.
Posted by Pollygarter at 19:05 1 comment: