A fire at sea, Part 2: the survivors

Here is the rest of my translation of the article about the disastrous fire aboard the Volturno from Le Petit Journal, 18 October 1913.  You can find part 1 here. The rescued are still in a state of shock on arrival at le Havre. They have nothing but the clothes they are wearing; precious life savings, tools, household goods all gone. The haunted faces are grim with exhaustion.

Of the list of survivors on board la Touraine, only three passenger are mentioned by name. Rafaele Ranelli and Francesco Olivieri, two young Italian emigrants, sound remarkably perky. By contrast, Mrs Refki Weisseg is in great distress.  She is described as a mother of four, two of whom were picked up by La Touraine. Their story, along with that of many of Volturno's passengers and crew, can be found on the Volturno Data Pages, Page 21. This Russian-Jewish family (under the name Weissbrod, Weissburd, Weissberg or Weissbard)  is listed as case 303 - see the case notes here. It appears that there were only two Weisseg children, not four. La Touraine rescued Refki and her three-year-old son Itzig. Mother (who was heavily pregnant) and son were reunited with father Welwel (or Wolf) and daughter Blume in New York. Could Refki be the lady on the right in this picture, with Itzig in her arms?

Le Petit Journal also interviews two Volturno crewmen. Cooks Hendrik Mermena (Mennema) and Adam De Bruin were Dutch and spoke good English. The Wreck Report draws particular attention to the courage of the ship's cooks who kept a supply of hot drinks, fresh bread and sausages going to all who were capable of eating, almost to the last.  The third crewman is listed in Jan Daaman's database as a seaman by the name of Hans Mognousky.

AFTER THE CATASTROPHE OF THE "VOLTURNO"

—Text of the report from sea of the captain of the French liner.

Le Havre, 14 October
La Touraine, having on board 42 survivors of the Volturno, docked this morning, at 8 o'clock.

When she moors, all the passengers of la Touraine are on the decks, and all the survivors from the Volturno are in cabins placed at their disposal by Captain Caussin, commander of La Touraine.

The unfortunates still do not yet dare to come on deck; the ship's personnel have to make them understand that they have arrived.

Only the three crewmen of the lost ship are able to communicate properly in English; none of the rescued passengers speaks French.

The saddest spectacle is that of eight children taken aboard without their parents.

They are huddled close to the female passengers of La Touraine who have made a fuss of them and tried to make them forget the grim moments they had spent during the day and night of Thursday. They call, weeping, for daddy and mommy.

While the ship manœuvres to pass through the narrows, photographers are positioning the survivors on the deck and are taking numerous photos. The features of Volturno's passengers seem now calmer, the women however appear still to be in a state of shock.

These unfortunates are for the most part in clothing donated by the passengers of La Touraine. They make a disparate group and rather picturesque. Some have kept costumes belonging to them, a few wearing boots, or broad hats,  and, covered with their fur coats; they have the appearance of the inhabitants of Poland.

Among the number of the survivors of the disaster is a Russian passenger, Mme Weisseg Refki, whose situation is particularly lamentable. The unhappy woman, who communicates with great difficulties in French, has succeeded in making herself understood; that she went aboard the Volturno with her husband and her four [sic] children. She has with her only two [sic] of the children. What has become of the others? What has become of her husband? Despite all the pathos of her circumstances, this unfortunate lady has had enough energy, on board La Touraine, to forget her pain, and gather together, in her cabin, the children whose parents are missing in the shipwreck.

After the interview which they have had with the representative of the Uranium Company, seventeen of the survivors from the Volturno have asked to be sent on to New York.

The others will be repatriated to their respective countries; the injured will remain in treatment in hospital.

Le Havre, 14 October.
Two or three of the Volturno survivors are in good health, in spite of the bath they took in throwing themselves into the lifeboats. Two cooks from Valturno, MM. Mennema and Debruin, are in the ship's sick bay. The former has a broken leg and the latter has pneumonia. A two-year-old toddler is likewise a patient, but his condition is not thought to be serious; it is in bed with his leg in traction that Mr. Mennema receives us and gives us the following version of the fire:


<<It was about seven o'clock in the morning of Thursday when the fire alarm was raised on board. I believe it was at the result of the imprudence of a smoker who must have thrown a lit cigarette into one of the holds before the fire broke out. Despite all the precautions taken, it spread rapidly and soon holds number 1 and 2 were in flames.

<<The captain got every passenger to put on their lifebelt. It was believed that the fire would soon be brought under control. We realised later that this was far from the case.

<<The sail locker, the stowage where some barrels were stored, was soon prey to the flames. All the passengers, terrified, gripped by a mad panic, were crowded together in the stern, but there was no act of indiscipline and all obeyed the officers' orders. The danger was increasing and the passengers throwing themselves overboard, two dinghies were launched but, alas! they were smashed before touching the waves and their occupants were killed on the spot or drowned.

Two Italian emigrants, Raphaël Ranella and François Oliveri, who come to get news of the injured, continue the story, saying that some of their companions took heart from learning that aid had arrived.

When la Touraine's whaler came alongside, they say, it was a terrifying scrimmage; the women were making a heart-rending clamour, the men were throwing themselves from the height of the deck of the Volturno into the fragile boats. Some broke their backs, some their legs in falling into the sea.


<<As soon as we were aboard la Touraine,  the passengers and crew of the liner wasted no time in getting us out of our wet clothes, wrapping us in blankets and making us drink hot drinks. We were the subject of all thoughtful care and it is thanks to their goodness that we must still be alive.>>

M. Mennema, who was on the upper deck when the fire broke out, threw himself in the sea, where he lost consciousness. When he came round, he was on board la Touraine. 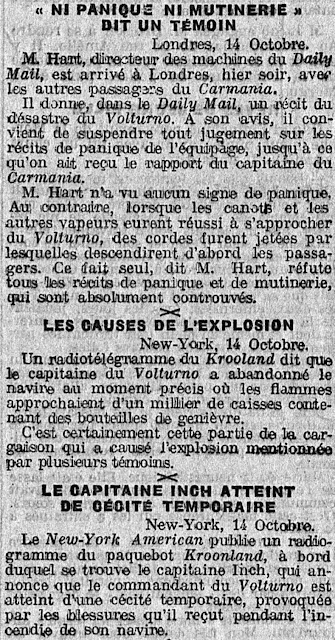 « NEITHER PANIC NOR MUTINY » : SAYS A WITNESS.

London, 14 October.
Mr. Hart, works director of the Mail, arrived in London yesterday evening with the other passengers of the Carmania. He gives, in the Daily Mail, a description of the Volturno disaster. In his opinion, it is appropriate to suspend all  judgement on stories of panic among the crew, until the report of the captain of the Carmania is received.

Mr Hart did not see the least sign of panic, by contrast when the dinghies and the other steamers were able to get close to the Volturno, ropes were thrown by which first of all the passengers descended. This fact alone, says Mr. Hart, refutes all the stories of panic and mutiny which are absolutely spurious.


THE CAUSES OF THE EXPLOSION

New York, 14 October.
A radiotelegramme from the Kroonland says that the captain of the Volturno abandoned ship at the precise moment when the flames were approaching a thousand cases containing bottles of gin.
It is certainly this part of the cargo which caused the explosion mentioned by several witnesses.

The New York American has published a radiogramme from the liner Kroonland, aboard which Captain Inch currently is, which states that the Captain of the Volturno is suffering from temporary blindness, caused by the injuries he received during the fire aboard his ship.
Posted by Pollygarter at 07:30